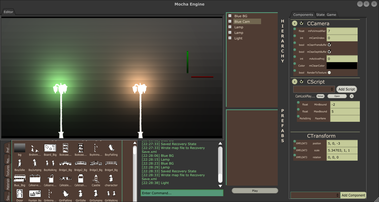 Mocha Engine is a component-based Game Engine currently being developed by my game team to support us in the current and upcoming projects.

It has a series of advanced features such as Multi-Threading, Composite Material System, Post Processing effects, integrated Scripting Language and Code Editor, Property inspector and more.

Supports both 2D and 3D games.
The engine is still under development and has reached the current state with only 16 weeks of work.
C++ - Used To write the engine
DirectX11 - Graphics API
FMOD - Audio
AngelScript - Scripting

My role in this project